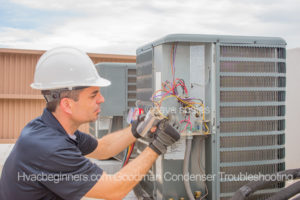 It’s been awhile since I’ve posted here and since I am kind of still actively working on hvac equipment I’ve decided to share a little story of a Goodman condensing unit that was giving me headaches. In the past couple years the only kind of hvac training I’ve been attending is the ‘hands on’ kind, which is great but it’s still best to keep taking classes especially from various reps to stay up on the knowledge base, which I haven’t been doing. Bad hvac tech. The type of Goodman condenser I will be referring to in this post is M#gsx140181lc which is a 14 seer, the air handler, which is mismatched as they decided to use hot water for heating, is First Co. M# 19UCQB, P# 65W193B-4V. The 13 seer Goodmans seem to get along with these units for cooling, the 14 seer not so much, so let’s get into that.

The year that this happened is 2017, July, in Denver, Colorado.

3 weeks ago I had a compressor go out with open windings. With the way things are now with vendors and stuff, we just got a new condensing unit, a more energy efficient one upgrading the 13 to 14 seer. Installed the unit properly, triple evacuation down to 300 microns, did not rise above 1000 microns with pump off, line set was only about 20 feet so very little refrigerant needed to be added to accommodate for the extra few feet of line set, purged with a couple psi of nitrogen while brazing to keep the pipes clean, did everything your supposed to.

Opened the king valves once installed with electric hooked up and all, then powered the unit. I heard a little hum, the condenser fan came on, but the compressor did not start. Not thinking clearly, I pulled the disconnect, then put it back in, and the compressor and fan both kicked on like they should have done in the first place. I hung around and waited for pressures to stabilize and I had about 120/320psi, 10 subcooling and about 16 superheat. Everything looked good to go, so I packed up all my hvac tools and such and got the hell out of there.

My co-worker calls me and says the condensing unit I just replaced is not working, he tested the windings on the compressor and they were all open. For some hvac training purposes…this means that when you measure resistance with your ohm meter, with the power off to the unit, compressor terminal open, you should read resistance from start-run, start-common, run-common. If one of those is ‘open’, it could be to internal overload protection. But in this case they were all open, and the compressor was sitting for several days with no power to it, so it was pretty much screwed, a three week old condenser/compressor shits the bed. Bad product? Maybe….but not likely….

Here are the hvac training symptoms to open windings on a compressor that the technician gave to me, these are just symptoms of a bad compressor and cannot be confirmed until a trained hvac technician undergoes system diagnosis. Do not try this shit if you are not qualified to do so, period, it could kill you. Now…

-voltage after contactor is 217, capacitor microfarads are within range, nothing is miswired according to diagram

-hard start capacitor is installed to the run capacitor properly, when power is applied, breaker trips.

These checks to me tell me there’s an insulation problem internally in the compressor that one of the wires is open or may be grounded. It’s toast basically.

New Goodman condensing unit comes in. Acid test negative. Install the unit properly as mentioned above. Apply power to the unit, condensing fan comes on, but the compressor tries to start 8 times before it finally kicks on. Bunk unit? Maybe, but my hvac training says ‘no’. The building this unit was in has elevators, so the voltage is not optimal and it sits around 215volts, minimal for the compressor to start according to the nameplate say 197volts.

Mind you this condenser is mismatched with the air handler, which uses a non-bleed TXV, which is also brand new as I installed that while going through the triple evacuation process. So why is this brand new Goodman condensing units compressor not starting everytime when called for?

If you are a hvac service technician, and you run into bumps in the road when troubleshooting, then you’ve had some time on the phone with tech support reps. Certain reps need information to help you properly troubleshoot the faulty hvac system at hand. From my experience with being on the phone with tech support, here is all the information that I gathered and was going to have ready once I spoke to someone. 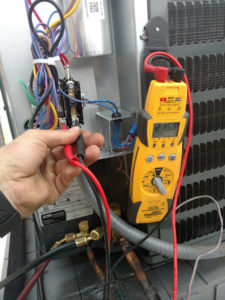 If you have compressor problems, check the voltage at the contactor, both before and after it and record the volts you get. Here the unit was running steady. 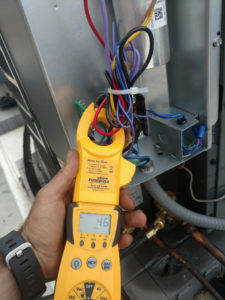 Next I checked the amps, notice that I am on the run wire for the compressor where I am checking amps. While on the photo below I am on L1 which is both the compressor and fan motor amps combined. For the purpose of this trouble shooting we only want the compressor amps which is 4.6 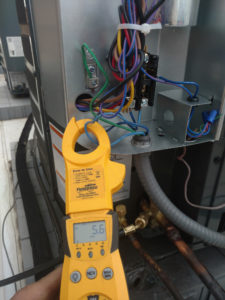 Next, just for the hell of it I checked the voltage across the run capacitor between common and herm. My voltage reading was 308.6 volts. By the way, don’t ever, check voltage like this, it can kill you. 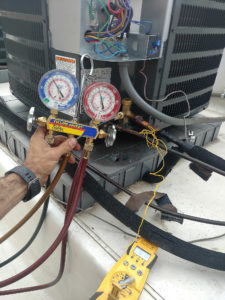 Now I got all my information that I need to tell to tech support ready, but one problem. Can’t get a hold of any tech support. If anyone knows if they exist for Goodman, please let me know. So the unit is running but the problem is that the compressor keeps failing to start after it shuts off, sits for a little bit until the thermostat calls for cooling again. So there’s obviously a voltage issue here so I threw on a hard-start capacitor and the unit fired right up, first time, every time. Now if this unit needed a hard start to work right why the hell didn’t it come with one? Maybe because the units brands are completely mismatched. Non bleed txv, pretty low building voltage, and it needs a hard start capacitor to turn the compressor, which I got some help from the fine gentlemen over at http://hvac-talk.com to confirm this as well. They are much faster and easier to find then Goodman tech support.

So the moral of this story is this. Whenever you install a new unit, new compressor, or open up a unit to the atmosphere in general, make sure it starts up the first time. Sit around for a couple of minutes and let the pressures stabilize. I know the dispatchers and your bosses (some of them) don’t want you standing around looking at guages for 10 minutes, but give the system a chance to complete a cycle, watch it start again before packing up your tools and crap. It just may save you a bunch of money and labor, that you could have been applying to something else.