The first one is radiation, this is done by absorption. A perfect example of this kind of heat transfer would be our sun, which produces heat and is absorbed by the earth.

The second way that heat can be transferred is called conduction. This is the process of heat transferring through metal. For example, if you heat up one end of a metal pipe the other end of the pipe will start to get hotter and heat up.

The third way that heat can be transferred is the most important when it comes to hvac training, and this is called convection. Convection would be a transfer of heat through a medium such as water, air, or refrigerant. That is what is used to transfer heat in a central air conditioning system, car air conditioning system, refrigerator, freezer, anything that has to do with HVAC. 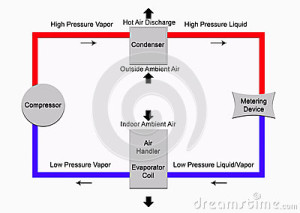 Now that we had a little hvac training on the basics of thermodynamics let’s move on to the four components that make up the basic refrigeration cycle.

1.The Evaporator – This is the coil that is inside of the house. Warm air will pass over the coil which contains the refrigerant, then the refrigerant absorbs the heat, then the you are left with cold air which is distributed to the rooms that you are trying to cool.

2.The Compressor – This is the life force of the refrigeration cycle, what it does is it will circulate refrigerant throughout the whole system. It will compress cold vapor into hot vapor, it also increases the low vapor pressure into high vapor pressure.

3.The Condenser – This is the coil that is located outside on a central air conditioning system. It removes the heat that is carried through the refrigerant, forcing the hot air out.

All four of these components much be working, if one fails the refrigeration cycle will fail and the space you are trying to cool will not cool. Now that you have some basic hvac training on components that make up the refrigeration cycle, let’s learn how it actually works. The compressor discharges high pressure, high temperature vapor through the discharge line (the smaller line).The fan on the condenser blows the heat out over the condenser coil, then the high pressure vapor will lose some energy and turn into a high pressure liquid. The high pressure liquid will then go to the metering device, where it is turned into a low pressure liquid, and low temperature. It now passes over the evaporator coils that are inside, the heat that is being removed from the room is absorbed in the refrigerant and then turned into a vapor, at low pressure and low temperature. It is now going through the suction line (the bigger line) into the compressor where it turns the low pressure, low temperature into high pressure, high temperature liquid. Then the cycle starts all over again. Remember that compressors pump vapor only, at no point should it be sucking in liquid as this can damage the compressor.

Now I am sure that this probably confused the hell out of you, that is why I opened up photoshop and made this little diagram for everyone. I know my design might not look as pretty as others you will find on the net but it relates to the article I have written and hopefully it helps you understand all that hvac training that I am trying to pound into your head. 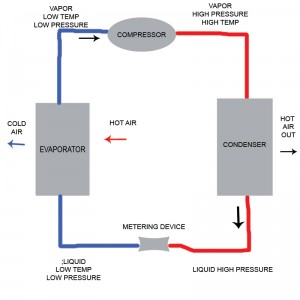 13 thoughts on “HVAC – The Refrigeration Cycle”