The condensing unit in a split central heating and air conditioning system is located outside, and is also referred to as the ‘condenser’. This is where the warm inside air is ejected from the refrigerant to the outside. One quick way that you can tell if the system is doing its job is it would be blowing out hot air in cooling mode, and if you have a heat pump, such as a pool heater, the outside fan would be blowing out cold air. Let’s take a quick look at what parts make up the condensing unit in a split central air conditioning system with some free hvac training. 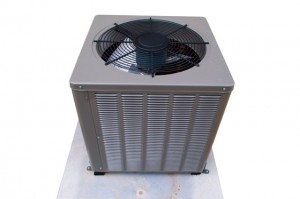 Compressor – This is the heart of the central air conditioning system, and in many cases is the most expensive part to replace. Compressors typically do not fail for no reason, compressor failure is usually do to poor installation skills, moisture in system lines, over charging or under charging the unit with refrigerant, or poor air flow inside due to undersized duct work or other air flow restrictions. The compressor compresses the refrigerant from low pressure low temperature gas to high pressure high temperature liquid in order to effectively remove heat from the inside of the home.

Condenser Coils – Another expensive part to the central air conditioning system that must be taken care of to get the most efficiency out of your unit. When outside air is blown over the condensing coils it removes the heat from the refrigerant and ejects it out the top of the unit. Washing the condensing coils with a water hose annually can ensure that they stay clean and free from obstruction such as dirt, dust and leaves.

Fan Motor and Blade – The fan moves the air from the outside, and pulls outside ambient air across the condensing coils and ejects the heat absorbed out the top of the unit. Unlike indoor blower motors, these are usually set at one constant speed. It’s important to keep at least a 5 foot clearance above the fan motor and blade, as hanging tree limbs and leaves can actually knock the fan blade out of balance over time.

Heap pump condensing units consist of the same operating parts as a cooling split system, but instead they have a reversing valve that switches the direction the refrigerant flows, and they also have a defrost control board.

Those are the basic Hvac condensing unit parts that are required to make the outside portion of the unit run, that’s it. Now with that being said there are also many other accessories and safety features that can be added to the condensing unit, and as systems get more efficient more and more accessories are being added. While when working right it can help the unit perform more efficiently and safely, but the more extras you have, the more better chance that one of these components may fail.

Start Capacitor – also referred to as a Hard Start, will increase the starting torque of the compressor. Many of the new Trane units come equipped with start capacitors and potential relays which remove the start capacitor once the unit is on line.

Low Pressure / High Pressure Switches – a safety feature that will prevent the system from running if a pressure drops below a designed setting for the low side or rises above a certain pressure for the high side. Low pressure switches will engage when there is a loss of air flow or lack of refrigerant. High pressure switches will trip when the system pressure rises to high, which generates many service calls for us, especially when painters that paint building cover the units up with a paint blanket while the system is running.

Compressor Time Delays – Prevents the compressor from short cycling or even running backwards by locking out the low voltage for a set desired time, usually between 2-5 minutes. If you have a sudden power failure, the compressor will suddenly lose power and then when power is restored will try to start again which can be detrimental to the equipment. A time delay can prevent this from happening. Although these days most of the newer digital thermostats have this feature built in to them and just need to be programmed into the thermostat.